Shopping trips alone with Ayla can be eventful. On one such occasion, I had instructions to nip out and acquire two packs of nappies. 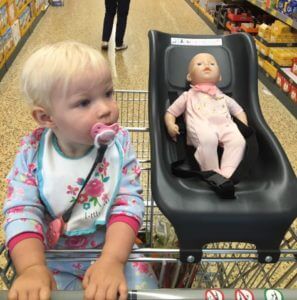 After managing to wash and dress both of us we departed on our nappy attaining adventure. Now I’ve wrote before about my trouble’s shopping with Ayla. On this occasion, my first mistake came as we pulled up to the shopping centre. Ayla had fallen asleep. The dilemma was do I wake her up to sit her in a trolley or do I spend ten minutes sorting out the buggy for the sake of a five minute purchase?

Pre-parenthood, I used to look at children in trollies eating things around the store and think ‘can they not wait’ and also feel slightly jealous! I have realised as a parent of a toddler that – no, they really can’t wait. A bag of Pom Bears out of the multi-pack or a little box of raisins can buy you time to get the things you need.

At the moment Ayla’s favourite in trolley snack is an apple. We can be generally found in supermarkets by following the trail of apple peel that she has spat out under the trolley with me scurrying around trying to pick the slime cover peel up shouting ‘watch you don’t slip’ to passing old ladies.

The first daddy daughter ‘big shop’ was the same one Ayla discovered she could climb out the trolley. This led to a constant cycle along the remaining aisles of Ayla picking up random food items, me trying to put her back in the trolley and trying to continue to shop, repeat.

For those reason, on the nappy buying trip, I decided to bypass the trollies and head in carrying a sleepy Ayla. We made it to about aisle two and realised I couldn’t carry our items as well as my daughter so headed back to the entrance for a basket. I have no idea how but it seems like she doubles in weight when asleep.

I maneuvered Ayla from the cradle position to rest her sleepy head on my shoulder freeing my other arm to carry the basket. Progress. Our poorly devised plan continued as I must have made it to aisle four when lactic acid began building up in my arm (must get back in the gym) and I had to put my basket down. I placed Ayla on her feet a number of times trying to keep her steady and wake her gently (looking back this is possibly the worst way to be ever woken up). She wailed a little and in her dazed state I managed to guide her up the nappy aisle.

With every step Ayla gained her bearings and I saw her usual mischievous look cross over her face. My grip tightened on her hand and I willed her to just stay beside me long enough to grab the nappies. I was distracted by a staff member hovering nearby and the radio chatter overtaking her walkie talkie. More staff members rushed around glancing up and down the aisle as I overheard a ‘secret’ emergency tannoy called over the radio about a misplaced child.

One staff member stopped at the foot of the nappy aisle behind me. I was in the midst of ‘loosening the reigns’ as my wife puts it and cajoling my recently awoken daughter into putting the two bags of nappies we needed into my much sought after basket. Ayla was cooperating, I couldn’t believe my luck, she picked up the nappies and was tottering back towards the basket, yes!

Suddenly I heard a loud voice, “That’s her! Pink top, blonde and a dummy! That’s her!” It was a staff member calling to her colleague. I glanced up at them then down at my daughter. Ayla was indeed wearing a pink top, had her dummy in and has the trademark family blonde hair. It started to dawn on me that these members of staff thought Ayla was the misplaced child!

The conversation between the two staff members followed,

I turned as third staff member walked up and down the aisle. I wasn’t sure what to do. Did I have to confirm I was in fact Ayla’s father? Would they believe me? Do I need to prove ownership of my child? How could I prove ownership of my child? I’d left her birth certificate in the house. I’d nipped to the shops in my slacks and my bum crack was probably showing as I’d crouched to show Ayla which nappies to get. If I tried to take Ayla’s hand or pick her up I knew she’d do her usual trick of running in the opposite direction or worse screaming in protest. Genuine panic at not knowing what to do had made me start to perspire…I probably look quite ropey. As the three staff members began to close in on me and Ayla, I heard another message over their radios.

The child in the question was thankfully found and the search party was called off. I let out a sigh of relief and we managed to get both packs of nappies into the basket without being arrested. We purchased the nappies and we made a deliberately slow exit from the store.

When my wife returned home and I heard the door open, I proudly exclaimed, “We got the nappies!” as if such an achievement was on par with a new job or a lottery win. “Ah great, thanks.” she replied then as she passed them in the hallway she quickly and nonchalantly followed up with, “You got the wrong size.”

2 thoughts on “How Not to Go Shopping With Your Child”