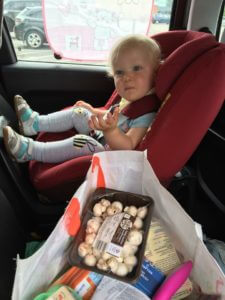 Before leaving the house on a daddy daughter jaunt, I am overcome with an information overload of questions which stem from the logistical nightmare of actually leaving the house with a small, dependent human.

Do I take the pram?  How far will I be walking with her? Will it rain? Are we dressed for rain? Is the raincover in? When did I last change her? Do I need a wee or a poo myself? When did I last feed her? WE NEED FOOD! I NEED FOOD!!

This internal battle continues for another hour. Packing the nappy bag seems like an impossible task when you throw into the mix modern day distractions of TV, mobile phone and the eternal battle of stopping Ayla from eating tiny pieces of fluff off the carpet.

Of course, when you do eventually get out of the house and amongst the general public, the fun truly begins. It would seem seeing someone with their own child dredges up a plethora of opinions in the general public. While carrying Ayla I’ve overheard people saying “Eeee, how’s he carrying that bairn?” (I have a tactic of holding Ayla with one arm across her front with her back to me and the other arm under her legs, which does seem to relax her and sometimes lulls her off to sleep – See, now I’m justifying myself!) Another occasion when cradling my daughter, I was told “Don’t let her sleep – She won’t sleep tonight” and then everyone always pulls her dummy out saying “Take that dummy out!” in baby talk, even though I’ve just gave her it.

Speaking of baby talk, I’ve found myself using this with Ayla around the house. It’s best not to get into the habit of doing this so often you walk the corridors of your workplace blurting out random squeaks, noises and general gibberish around peers and esteemed colleagues. After enjoying a bottle of beer in the office one Friday after work, I asked ‘Where are we sticking the empty bot-bots?’ When one of my work mate looked at me like I was nuts I realised my mistake.

One day I left the pram in Mummy’s car as she drove off to work. I needed to pick up baby milk so opted to carry Ayla around the village. I was ‘feeling the burn’ quite intensely but on the plus side my biceps got a really good pump on. By the same token, how does anyone ever leave the house in one of those ‘baby carrier’ things. It’s a two, maybe three, man job at least to actually get it on and then there’s no way you can get the baby out of it solo. Well, for me anyway, Rachel seems to manage??

My Wife and I recently walked down to our local community play area. Two young lads around 8 or 9, approached me ball in hand, asking me if I wanted a kick around. I shot my wife a questioning glance and decided to humour them with a game. They asked me if I was any good, I couldn’t formulate a humble response, after all I was bigger, stronger and had many more years experience than them in playing the beautiful game. They quickly decided it would be them two versus me and just as quickly began passing to one another, successfully nutmegging me (obviously I allowed this to happen, got to boost their confidence and all that!) A little more running around trying to retrieve the ball, sweating profusely and running out of breath. The older, cooler, edgier brother came over telling them they had to go to ‘proper’ football. It must have looked reminiscent of Doddsy chasing the Brazilian kids for their ball on Mike Bassett. After two failed attempts to make eye contact with the older brother and nod toward Ayla so he knew I ‘with child’ at the playpark, I decided in future I’ll stick to pushing her on the swing, no matter how much I fancy a kick-about.

My public awkwardness seems to intensify in shopping centre car parks. One of my first trips alone with Ayla, I was attempting to to get her back into her car seat. The straps across Ayla’s shoulders wouldn’t reach the socket (Rachel later informed me the straps could be adjusted very easily, apparently.) A passer by, returning to his car, noticed my struggle. With my trolley wheeling around behind me, he asked if I needed help. My male pride took over as I said “no thanks” and continued struggling. He managed to get my trolley to a standstill. He sat in his car and held off starting the engine, I felt the eyes on me. With Ayla’s cries increasing in decibels by the second, I thought I would never manage and wondered to myself which emergency service would be appropriate for this kind of issue. Finally with one last big push it clicked into place. The sense of achievement was overwhelming, I spun on my heels letting out a massive “YES!” in the highly populated car park garnering strange looks all round.

Another belt strap conundrum saw me struggling to get the strap on the in-trolley seat across Ayla. A man wearing a Euro ’96 shellsuit approached and demonstrated how the belt length could be adjusted. He proceeded to follow me into the store, advising me on EVERY-SINGLE-POT of baby food in the aisle, like he had taken it upon himself to guide me, the clueless man-child, through this crazy parenting maze.

Chaperoned shopping trips were usually less stressful, but this one saw another possible catastrophe. It was meant to be so simple. All I had to do was sit and wait in the car with Ayla while Mummy popped back in the supermarket, we’d forgotten the almond milk. She was strapped in her car seat, no danger to anyone. So I pulled out my mobile and started checking twitter. I remember noticing how quiet and well behaved she was being, and thus carried on scrolling. I turned and saw Ayla silently staring back at me in the baby mirror, with full hamster cheeks, chewing furiously with pieces of white debris on her chin. I quickly got out the car and ran around to her side to see what she was munching on. On further inspection she had ripped open the pack of raw mushrooms from the shopping bag. A quick google showed me there was no risk in eating the ‘shrooms and, as Rachel returned to the car I laughed it off. At least they weren’t in anyway ‘magic’ which would have made In the Night Garden even more interesting viewing that evening.

4 thoughts on “How to Appear Normal In Public”