Tony Jeffries is an entrepreneur, a 2008 Olympic Bronze Medalist and an undefeated professional boxer. He now owns two gyms in desirable Los Angeles. He gave us his thoughts on life as a father to his two girls, Jayde and Jessie. 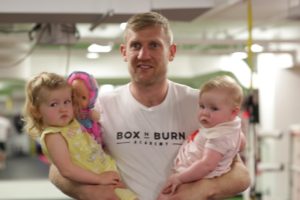 I’ve been a dad for just over two years and it’s been a great, but tiring experience…
All I ever wanted was boys and now two years later I have two daughters – Jayde, who was born in July 2014, and Jessie, who was born in January 2016.
I never realized it was possible to love anything so much as it is with these two. I’m not going to lie, I wish they were both boys but even if they were, I know for a fact I couldn’t love them any more.
I thought having one kid was tough when Jayde was born, but she was 18 months old when her sister arrived and then it was even tougher!
My wife Sarah and I both live in Los Angeles, California, but all our families live in Sunderland, England, which made it even harder for us. But we have been fortunate that my wife’s parents are always coming out here to visit us and help us out because when you live in the USA all mothers get is three month’s maternity leave.

My wife is a full-time emergency room nurse in Santa Monica and I co-own two booming gyms called Box ‘N’ Burn and a certification program, the Box ‘N’ Burn Academy. I have over 50 employees to manage so my work-life is non-stop.
My wife’s parents have been so amazing and without them I don’t know what we would have done! I refuse to get a “nanny” over here as I find it hard to trust people especially with my children, who really are my life and soul.
If I could give any advice to parents it would be to try and give your children as little iPad, iPhone and TV time as possible and give them as much of your time as possible – read to them, sing to them, play with them as much as possible. I believe the first few years are really the foundations of their whole lives and the way you are with them when they are younger affects them in later life.
Always try and be as positive as you can with them and keep all negativity out of their lives.
Children are a massive joy and I’m really trying to enjoy them as much as possible while they are young, especially with a couple of girls because it’s going to be a struggle when they have boyfriends! I try not to think of that just yet – LOL! 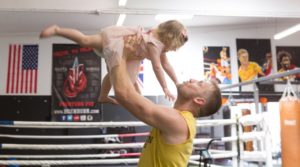 2 thoughts on “Tony Jeffries – How to Daddoo”