Teething is a long, enduring battle. Not only is your child in pain but there’s little you can do to avoid it. Ayla would slavver for England, develop rosy red cheeks like a beacon of light and get a constantly runny nose. The pains can come out of nowhere, and Ayla would begin screaming uncontrollably. We felt helpless watching our little one in pain but there were several things we could do to try and help her.

Ayla began the symptoms of teething at 8 weeks old. As first time parents, we assumed her first tooth would sprout within a few days. How very wrong we were. These symptoms of teething continued for another 8-9 months before that milestone happened. Her little gums would swell and we’d be sure we could see a toothy peg peeping just under the surface but like some kind of magic the tooth would disappear the next day. In fact, Ayla didn’t cut her first tooth until she was almost 11-months-old. Strangely, she took her first steps before that elusive, first pearly white appeared. For us, it was a big milestone. I remember cluelessly asking my wife how long teething lasts and was startled to learn it can last years until all of her teeth are through.

Of course, all babies are different. For instance, our god daughter got her first tooth around the four month mark and I’ve even heard of babies being born with teeth, slightly creeps me out!

We began scouring the market for possible solutions or even something to take Ayla’s pain away and get a good nights sleep. We’ve compiled a list of the items we used to quell the teething terrors –

A family member of ours recommended baby bonjela. Much like the adult version this gently numbs the area you apply it too. If your child is partial to the taste, as Ayla was, it doesn’t always last long enough before it’s licked off the gums. We used to store ours in the fridge for maximum cooling affect. Got to say it is canny tasty!

We found natural teething powders gave instant relief but could sometimes be tricky to get in there. I remember one instance when Ayla was screaming her head off. It took the two of us to administer the powder. Rachel had the job of positioning Ayla. I had the job of opening the sachet and pouring it into Ayla’s mouth. Let’s just say none of the powder ended up where it was supposed to go and Ayla looked like Tony Montana. 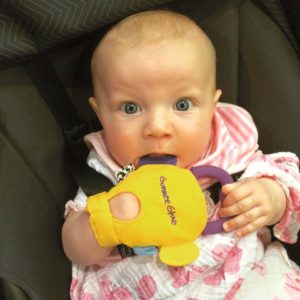 As Ayla had started teething so early on, one of the first things we bought was a teething ring. The only problem was, at this early stage Ayla didn’t have the hand eye co-ordination or strength to hold and chew on it simultaneously. We spent a week or so holding the teether to Ayla’s mouth. Getting covered in slaver and screamed at when we didn’t have it at the right angle. Ayla would often slyly bite your finger instead of the toy, how such a toothless wonder could inflict so much pain I’ll never know. One night I came across an advert for Gummee Glove and we ordered it on the spot. The little mit was great and Ayla enjoyed chewing on the different textures as much as the removable, heart-shaped teething ring. She still loves a good gnaw on that thing even now.

As Ayla’s ability to do two things at once improved (I am still yet to master this) We jumped on the bandwagon and purchased a Sophie La Girafe. Everyone parent I know seems to have a Sophie. She is made from 100% natural rubber making her safe for babies. Ayla was buzzing with the fact she squeaks too!

Ayla was extremely rough with her. I sometimes felt a bit sorry for Sophie, and slightly scared of Ayla. The shear intensity in which she would gnaw Sophie’s head whilst staring intently into the distance was quite un-nerving. Sophie was a great buy! 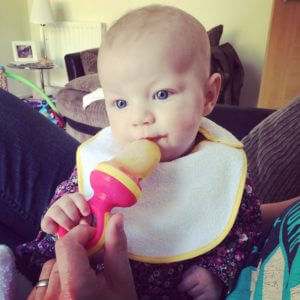 At the start of Ayla’s first summer her teething symptoms were in full swing. We had begun to wean her aged around five months. She adored fruit and vegetable purees and one Sunday afternoon my wife came home from the supermarket with another new contraption – the Nuby Garden Fresh Fruitsicle (also known in our house as ‘that net lolly thing’). The plastic handle comes with a net that you’re able to freeze any fruit or veg puree into. It can also be used without freezing to reduce choking hazards when babies are trying new things.

Rachel filled it with some fresh carrot and apple puree, lashed it in the freezer and the next day Ayla was loving life. The frozen fruit acts as a coolant on babies irritated gums offering relief for all concerned. I remember giving Ayla frozen summer fruits one day, thank god we were in the garden, Ayla looked like a mini Dracula and her full outfit ended up in the bin.

Anbesol was recommended to us by my sister, who’d used it with our nephew 8 years prior. During a visit to their house, we had no teething powder left and Ayla was in full meltdown mode. My sister appeared from the kitchen with a tiny vial of liquid. Rachel had read some mixed reviews regarding alcohol rubs but the relief it gave to Ayla outweighed the minimal concerns we had. A quick rub on the gums was all Ayla needed for a tear free afternoon. God knows, I felt like downing the pot some days. It also lasts forever! The pot we bought is still going strong over 18-months later. Apparently our parents used it with us, they possibly still have it in the cupboard!

At the ripe old age of 22-months, Ayla only has 12 teeth. Our teething journey is very far from over. I’ve got to say, the two back teeth she owns created a lot of upset but at least she can chew solids now, every cloud!

Ayla has learnt to self-regulate when she’s getting a pain and now and again we do use Calpol for a bit of relief at bedtime. I feel it’s good to remember what it’s like for an adult to have toothache. If you’re anything like me and your pain barrier is none-existent, there’s a lot of whining. The pain feels like it’ll never end. So imagine how your little one is feeling and they still manage to smile. These little people of ours really are quite amazing.

One thought on “Teething Troubles”