I remember when I was younger Sunday nights followed a certain routine. I’d have my bath, come out with wrinkly hands and feet and get in my PJ’s. Next I’d sit in my dressing gown watching You’ve Been Framed and, staring into host Jeremy Beadle’s eyes, that Sunday night dread would loom over me about returning to school the next day. I got a similar feeling when my wife returned to work after 9-months on maternity leave.

I am a bit soppy when it comes to my wife, I’ve stopped trying to hide this fact so forgive me for the PDA. We sit and laugh at our wedding video sometimes – during one clip the one-on-one chat with the videographer seems more like a ‘how many times can you refer to your wife as amazing’ challenge.

My wife, you see, IS an amazing person. She keeps morale high in our house with her upbeat, positive nature. She makes the important decisions and holds a steady nerve under pressure. Her resilience in doing the ‘hard jobs’ with Ayla is nothing short of incredible. She took to parenting like a natural and although she’d probably disagree, she always seemed to be confident in what to do with the new human that we brought home.

I, meanwhile, began as the parenting equivalent of what a Blobfish contributes to the animal kingdom. Through many hours of teaching (which my wife does for a profession), diagrams and guidance on some pretty simple things I began to grow in confidence as a father. Just to put you in the picture, before any of this responsibility I’ve always welcomed being ‘advised’ even in situations where I probably know what I should be doing. In our early days I once called Rachel, whilst she was in a meeting, to ask her how to cook pasta. On another occasion whilst at a BBQ with friends, they used paper plates to explain to me how the moon works. You get the gist. I like to think that having Ayla has transformed me (slightly) and I tend to use my initiative more nowadays.

You may have gathered from previous blogs that my wife has acted as somewhat of a mentor to me on our parenting journey. She is very much captain of our family ship. So, when she returned to work it dawned on me that things were going to be different. At the time I was working compressed hours on nightshift so I was reluctant to take the role as captain, unfortunately Ayla was still a bit too young to take the reigns so I would have to step up. The good thing about working nightshifts was having Thursdays-Sundays off every week.

We were really lucky that Ayla’s grandparents could look after her Monday-Wednesday, Thursday’s became daddy-daughter-day and Friday became a family day as Rachel reduced her hours. We had a great set up and the fact that we had no child care costs was a real bonus, I don’t know how some families manage. 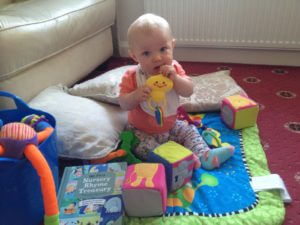 The changes weren’t just about what I would have to take on, but what Rachel and Ayla would have to give up. That precious time everyday was something that Rachel really wanted to continue and I’m sure Ayla did too. That being said, being alone with a baby all day long can be quite isolating for new mums and dads. I generally end up mumbling to the cBeebies presenters through the telly. Rachel took Ayla to baby classes three times a week. I remember her telling me how gutted she was to have to give those classes up upon returning to work.

As much as my wife loves her job, she explained to me how much more she loved spending time with our daughter. The anxiety really set in about a fortnight before when Rachel had a slight meltdown and I was left wishing I’d stuck in more at school to earn a two person salary. But that wasn’t our reality, we dusted ourselves down and I assured Rachel that we would get through it. Was I becoming the morale booster?

That first morning was like a military operation for the girls, I was just going to bed off nightshift as they were leaving for Grandma and Grandads. I didn’t get the true picture of how it would be until later that week. I had to start making my own bait again because on most nights we’d be passing ships, there were no more family snuggles in bed when I got home from work and the house was quiet whilst I slept (Okay, there were some positives).

The first Thursday rolled around and I was handed a pre-packed baby bag, food was lined up in the fridge for both of us, clothes, nappies and wipes laid out – what could go wrong? I had planned to take Ayla to a local reading group a short walk away. We survived and had a great day! Rachel’s step-by-step checklist helped me a lot, including reminders to ‘strap baby into buggy, close and lock front door, wear a coat’. Yeah, she’d thought of everything. Despite all the anxious worrying, it made for an easy transition. You’ll be pleased to know I no longer need the lists or pre-packed essentials. Dad of the year!

3 thoughts on “Back to Work”