I was first made aware of the Magic Sleepsuit by a fellow new Daddoo. He waxed lyrical about this new sleepsuit which was helping the whole family sleep after a tricky first few months. 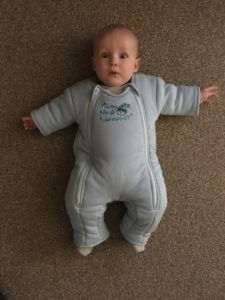 I subsequently reached out to Baby Merlin, the makers of the Magic Sleepsuit. The swaddle transition product which provides babies with a cozy, calm and safe sleeping environment. It’s meant for babies who are ready to transition from the swaddle but still require a secure ‘cradled’ feeling when sleeping.

It’s also designed to transition from moses baskets to the more spacious freedom of a cot. For back sleeping only, the Magic Sleepsuit follows the ABC of child sleeping (Alone, Back, Crib). It should be used in a room of an appropriate temperature (SIDS prevention guidelines recommend baby’s room be kept on the cooler side).

The sleepsuit comes in two sizes, 3-6 months and 6-9 months with a weight guideline. It’s worth mentioning that we never swaddled Daniel, he’s a hot-body like his Mam and older sister and hates his feet covered. He would not settle in a baby sleeping bag and prefers to kick every blanket off him meaning we are in a habit of regularly waking to check he’s not too cold and re-cover him.

Daniel tends to be quiet and content during the day but like any baby he has gone through phases of night behaviour – from constant cluster feeding to waking every few hours, the longest he has gone between night feeds is three to four hours at a push. With my wife feeling more and more exhausted each day we were looking at different tactics to get Daniel sleeping more soundly for longer periods.

Our first night using the Magic Sleepsuit didn’t go quite to plan and was an uncomfortable night for all of us. As Daniel was exclusively breastfed at this time, during the night Rachel would generally feed him in a laid down position transferring him back to his pod within the cot when he was finished feeding.  We followed the guidelines dressing Daniel in a regular baby-grow with the Magic Sleepsuit on top. He looked like a little sumo wrestler and actually settled really well, drifting off to the land of nod. He slept soundly for a few hours but when my wife lay him beside her for his feed he seemed to be stuffy and hot in the suit obviously taking on some of Rachel’s body heat. She decided to remove the suit mid-feed and the disruption did not go down well with our hungry little tyke. Once Daniel was fed he fell back to sleep. Attempting to put our sleeping baby back into the Magic Sleepsuit in the dark without waking him or causing him to bring up his feed proved too difficult for us and we reverted back to the old faithful blanket. On reflection we decided we’d wait until the night feeds were in order and then try the sleepsuit again.

A few weeks passed and Daniel was now being combination fed, taking formula from a bottle a once or twice a day. As his sleeping pattern was still irregular and my weary wife was feeling a tad too zombiefied, I offered to do the odd night bottle feed. With the recent cold weather bringing the room temperature down a little I suggested we give the Magic Sleepsuit another go. I firmly believe the failure of Night 1 was purely down to my eagerness to try it out when it wasn’t really practical for us at that time. My wife was off out for some much needed downtime, a meal and drinks with the girls and an overnight stay, so I got the little sumo suit back out. Daniel snoozed downstairs with me as he usually does until about 11pm when I dreamfed him his last feed then put him in the Magic Sleepsuit. We retired to bed and I have to say he genuinely seemed more content as soon as he was in it and miraculously slept a solid five hours. Upon waking I dashed down to sort his bottle, had a squeeze of his nappy which was fine then fed and burped him whilst he was still wearing the suit. Score, he was back to sleep for another hour.

In conclusion, we’re going to continue using the Magic Sleepsuit. Having now outgrown his pod it seems to be the perfect thing to get him sleeping in his spacious cot. As his feet are free and the slightly weighted suit keeps him feeling settled and cosy I feel this is ideal for Daniel. He seemed super content and secure in the suit and my wife is looking forward to a (slightly) extended rest.

I’d definitely recommend the Magic Sleepsuit to other parents looking to make the transition, it could be just what you are looking for. 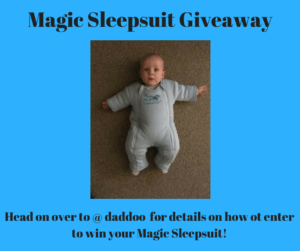 We’re running a competition over on our Facebook page. Head over for details on how to enter to win your own Magic Sleepsuit.

N.B. This is a collaborative post having received a product to review from Baby Merlin.