It’s often the case, you can get your child all the presents in the world and they’ll still end up sat playing amongst a pile of wrapping paper or with the cardboard box the thing is packaged in. Our 8-month-old son is no different to this so much so we’ve compiled a list of random inanimate objects our son loves.

I don’t know if it’s the crumpling sound it makes, the image of his fellow baby on the packet or patting it like a drum but Daniel’s #1 love in life thus far has been the packet baby wipes come in. He even loves changing time because of it. If he’s wriggling too much on his nappy mat one glance of that packet is all he needs to feel content. Tickle him with it and he laughs his head off. He’s not so much bothered about the contents of them. Show him an actual wipe and he’s not remotely arsed.

I think Daniel’s favourite place in the world would be a light fixture showroom in a DIY store. Any building we enter he likes to perform a quick recce and check out the light fixture of said room. He’ll ignore baby talk or people showing him attention and stares up at the lights as if they’re about to drop on someone’s head. 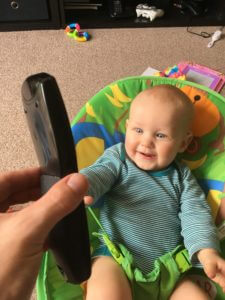 He doesn’t seem too fussed on the new fangled Sky Q remote. He likes the original and best old Sky Digital remote. So much so we’ve refused to chuck the old remote out. We’ve removed it’s batteries and it now lives in his toy basket.

4) The Clock in Me Mam’s Lodge

Imagine the Morning Song playing as we awake from our slumber at my Mam’s lodge where you’re surrounded by wildlife, scenic greenery, truly at one with nature. Then Daniel see’s the big clock on the wall and becomes obsessed for the week. It’s a lovely clock to be fair but Daniel would peer round the corner at it, again completely blanking me, to get another glimpse at the timepiece.

Mainly chewing them while they’re still on his feet.

Do your kids prefer inanimate objects to toys? Please say they do, in the comments below…

One thought on “Inanimate Objects Our Son Loves”