Here’s another great guest post as 33-year-old Graeme Donkin from Sunderland tells us about his busy life with Isabella and twins, Matthew and Christopher. 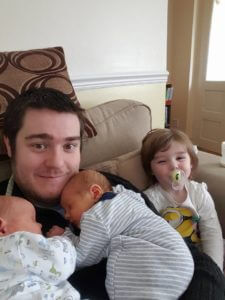 Tell us about yourself and your family?

I’m Graeme, I’m 33 and I’ve grown up and lived in Sunderland for my entire life. I became a dad for the first time in March 2014 when my wife Angela gave birth to our daughter Isabella. Having children is something which from an early age I always wanted to do and Isabella was the perfect baby. She was always laughing and smiling and she very rarely cried, as a first time dad I don’t think I could have asked for more.

We always knew that having another child was part of our future and our outlook was always that if we were going to have another baby, the best idea would be to do it sooner rather than later so that we got the ‘baby phase’ done (those early baby days are far from the easiest and most fun filled). When Angela fell pregnant again just over a year after Isabella was born, everything seemed to be going to plan but as things went, we got slightly more than we bargained for.

At the first scan for the second pregnancy, the midwife rather unceremoniously dropped the bombshell on us. ‘Okay I can see this is a twin pregnancy, I’ll just give that a moment to sink in’ Sink in it did not! I don’t even think it registered until we stepped out of the hospital after that scan what we had been told. I wasn’t prepared for this at all. We were living in a very small two bedroom house which we had agreed we could just about get by with for a year or so after having another baby, now all of our plans had to change.

Nine months later, Matthew and Christopher were born and our family was complete and then some. Two years later I now have a beautiful four year old daughter thriving at nursery and seemingly everything that she tries and two cheeky little chaps who certainly know how to cause some trouble when they want to!

How do you balance family life and work?

Four years since starting a family, I’m still working on the balance. It isn’t the easiest thing and I have learned that you have to be appreciative of all of the moments you get to spend as a family, even if for a time you have to accept that they may be few and far between, especially until the kids are a little older. I work a 35 hour week over 4 days but my daily commute to work and back means that I leave for work, sometimes before the kids are even up (if we are blessed with a rare sleep in for the kids) and I get in from work just before the daily bed time routine commences. Between my wife and I, we work six days out of seven so we only have one day a week to try and spend some valuable time together as a family. This has been always been tough and still is to this day, I just try and keep in my mind that the way things are, is only for a short time in the grand scheme of things. When we do get to spend some time as a family, we try and get the kids out of the house as much as possible, even if it just some time spent in the park or at a museum (places with a pay once and visit for a whole year option have become our best friend) When it comes to work, I just remind myself that I am there to earn the money that will allow us to have the family moments and that helps me through week to week.

What’s the best thing for you about being a dad?

The best thing for me has always been the pride I feel when I see the kids learn something new or master something, and in turn seeing how it makes them feel. One of the things that has fascinated me since becoming a dad is seeing how fast babies and toddlers pick things up, the way they seem to be like a knowledge sponge, taking everything in and figuring it all out. Picking Isabella up from nursery for her to present something she has drawn or made that day always makes my day that little bit better. Seeing Matthew or Christopher dash over to show me their block tower they have built or how they have figured out a particular button on a toy does a particular thing, their excitement is infectious and it constantly makes me smile.

What has been your funniest moment as a dad?

The first thing that comes to mind is something that takes me back right to the very beginning of becoming a parent. We laugh about this now but I suspect at the time, things may not have appeared quite so funny. I have an unconscious and nervous reaction to two thing, one is the sound of wretching, the other is the sound of screaming. The unfortunate reaction that I have to these two things is that I start to laugh and I find it uncontrollable, then more I try to control it, the more I laugh. Now two of the things that are very commonly associated with labour and giving birth…….are wretching and screaming (you can probably tell where this is going) I’d tried to set the expectation in advance that I may start to laugh during labour and that I couldn’t control it (I really can’t). I managed to just about get through the bit with the wretching early on, but when the screaming started, I just couldn’t control it. Picture the scene, the midwife is tensely trying to guide Angela through labour, Angela is trying to get through labour…..and I am desperately trying to stifle laughter. I thought I was hiding it pretty well, it turns out I wasn’t at all. I have been reliably informed that if looks could have killed, I would have died from midwife stare. She wasn’t impressed at ll. We laugh about it now…..and I still haven’t learned to control it. 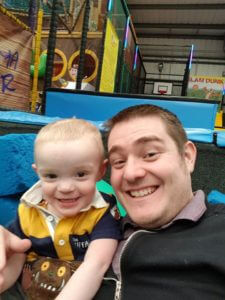 What is your top tip for new or expectant dads?

I generally avoid offering advice or tips to other parents because I think that it is something you just have to learn and experience for yourself. No one can tell you what to expect, what is to come and how you will deal with it. The one piece of advice I do give whenever anyone asks me however is routine. Routine, routine, routine.

Being a parent in the early days isn’t easy by any stretch, and it is even more difficult if you find yourself with a baby who doesn’t want to sleep at night. The night can be your salvation, the time to have a couple of hours just to recharge the batteries or just sit and do something that isn’t feeding, changing nappies or burping the little one.

After a rough first few weeks with Isabella where she struggled to sleep, we began a military bedtime routine which we then never broke. It was the same process every night, bath at the same time, bottle at the same time, bed at the same time. You are unlikely to get the routine right at the first go, you have to work at it, but it can be a life saver. When I talk to people about routine, they often ask ‘well what about when you can’t maintain the routine, what if you are at a wedding or a party or something’ The answer is simple, one person comes home early and maintains the routine. We routined the boys from day one despite people saying you can’t routine newborns. From two weeks old, the boys understood the difference between night and day and two years later, the three kids go to bed with the same routine every night and they sleep through every night.

If I could give one piece of advice to people when it comes to having twins or a multiple pregnancy?

It’s the advice that I was given by a ‘guardian angel’ of a man one day we were out when the boys were just tiny and it is advice I still tell myself often.

During a fraught trip out to a museum when the boys were probably only 7-8 weeks, things were boiling over. The boys were screaming, I was feeling like I was about to lose the plot and then I saw it, saw a man looking over at us. I had become accustomed to this since the boys were born. I prepared myself for one of the litany of recurring things you get told when you have twins ‘Double trouble, you’ve got your hands full, which one is the good one’ He approached, looked me in the eyes and in that moment, saved me when he simply said ‘It’ll be alright, it gets easier’ As it turned out, this man and his wife were also parents of twins and in two minutes, he made me feel like things would be ok. It was a turning point and even now, in the maelstrom of a three way toddler tantrum in our house, I find myself remind myself of his words.

Many thanks for Danny for the opportunity to contribute to his candid and often hilarious blog on the challenges and experiences of being a Dad. 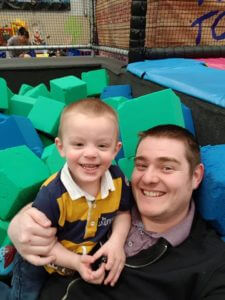