This past week was massive for our family. It was the week our daughter Ayla took her first steps in the big, wide world and began her first week at nursery. 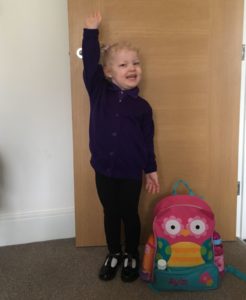 Ayla had her first ‘settling session’ the previous week.  A settling session is a wonderful idea to allow children to get used the the environment away from the parents.

Ayla had raised some doubts to us both in the last week, mainly that she’d miss us when she was there. I, meanwhile, was quite selfishly having my own doubts fearing she was growing up too fast despite being an outgoing, socially confident, little girl.

I remember sitting in the next room listening to her and Rachel recite nursery rhymes and, somewhat melodramitically, I couldn’t help but think as she was growing up these moments would become less and less frequent.

The week itself went well. Like all kids, she was coy about what she’d done while at nursery. The info I could prize out of her was she’d played with the water trays on her first day and on her second day she’d leant on the tray and spilt it all over herself but she assured me her teacher said (in her grown-up voice) “Don’t worry Ayla. I will change you.”

Later in the week she released further snippets of information including that she’d played in the sandpit and also that she’d made a friend who she chases boys with!

Her first week at nursery clearly took it’s toll. When Grandma and Grandad went to pick her up on the Friday, she came out upset informing them that she needed to lie on the sofa with a blanket, watch a movie and take a nap. She’s not demanding at all, is she?

The day she started I half-jokingly posted on social media my worries from her first week at nursery. It’s a catch 22. For all I joked I’d miss her and didn’t want her to continue to grow so fast, I was still excited for her and to watch her grow and learn. I might learn something too, I could probably do with resitting. I do know for sure I’ll always be extremely proud of my little girl.

Well done to my Ayla Smiler, we love you!

One thought on “Ayla’s First Week At Nursery”