When we found out we were pregnant for the second time, the first question anyone asked was “What do you think it will be?” or the even harder to answer “What do you want? Boy or girl?” 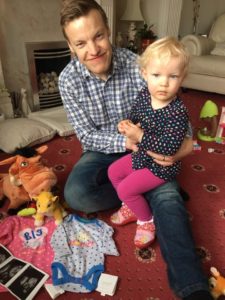 The fact we already had a girl made everyone assume that me and the missus were just desperate for a little boy. To be honest, as cliche as it sounds I honestly didn’t mind. I just wanted a healthy baby and at almost halfway through this pregnancy that’s still all I want.

All this talk of boy or girl, no matter how much you try to deny it, begs the question – which would be better? A boy or a girl? You hear so many tales indicating that “girls are more stubborn than boys” and “boys are very boisterous” etc. Actually, we realised quite quickly with Ayla that you can have a stubborn, boisterous little girl with so many positive qualities all rolled into one.

From my own standpoint, I felt better equipped to have another girl. She would have all Ayla’s hand-me-downs and I would know what I’m doing, been there, done that. With a boy, I’d have to teach him DIY, woodchopping and all that manly stuff I know nothing about. I don’t know where I get this stereotype from as my wife takes care of all the DIY in our household.

As you may know if you have read previous blogs I was born with a rare syndrome, Simpson-Golabi-Behmel syndrome (which I will discuss in more detail in a later blog post.) It seems even that is gender biased like so many other things these days. With Ayla’s pregnancy we were given additional scans to keep an eye on her heart, growth and other aspects that could affect her at birth. Due to new findings in the syndrome, our second pregnancy was dealt with more confidently, we were given more information and a game plan for every outcome.

When we went for our twelve week scan, we were asked to attend an appointment with some specialists in fetal medicine. I had mixed feelings. I was so excited to see our baby for the first time but I can’t deny how anxious I felt that the baby may be affected. In a nutshell, if the baby was a boy the pregnancy would be treat as any other. If it was another little girl she would be a carrier of the syndrome and possibly suffer from the syndrome herself. At this same meeting we found out that our 2-year-old daughter Ayla is definitely a carrier of SGBS. We were booked in for an early gender scan at 16 weeks.

Despite admittedly being a little nervous on the way to the hospital four weeks later, I knew we would stay positive regardless of the outcome. The moment the serious and clearly well-read consultant placed the scan stick thing (scientific term!) onto Rachel’s stomach he said “This baby is a boy”. We both smiled from ear to ear and squeezed each others hand, just as we did when finding out it was a girl first time round.

As Rachel and the consultant engaged in an adult conversation about chromosomes, my mind began to wander. A few minutes later, I blurted out “So how do you know? What do you actually look for?” midway through their conversation to blank stares from everyone in the room. “He has a willy” was this highly trained, specialist consultant’s point blank reply. He re-positioned the scan and showed me my son’s piece (proud dad moment!)

The doctor finished our scan mentioning to the sonographer the key points and what we took away was that our boy was doing just fine. We felt elated that everything was OK and all the anxiety seemed to melt away. At this point, I feel like I should mention my daughters physic abilities. She knew from day one it was a boy. When family members spoke about the baby she would let out a poignant “boy” without being distracted from her play.

So here we are about to be parents of ‘one of each’. It’s 2.4 Children and I’m Gary Olsen. We’re all excited, while a little nervous, as with any new arrival. Regardless boy or girl, we feel very lucky.