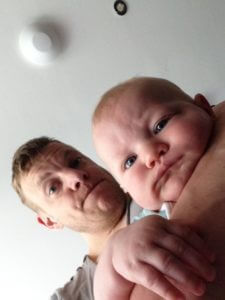 I’m always left holding the baby! Shot’s fired, I hear you cry. ‘Wait till your wife reads this’, I see you type. I mean  this 100% literally though. The fact is in Ayla’s first 11-12 weeks I tried to carry her every waking moment we were together.

I mentioned in a previous post how I was once forced to carry her around the whole village. Ayla’s just went 20 months and, despite her being able to walk quite proficiently, I still instinctively go to pick her up. In a bid to find her feet/confidence she wants to run free and in a vain attempt to continue to baby her, I still want to carry her everywhere.

I’ve annoyed younger relatives in the family muttering “CAREFUL!” almost by habit at anything and everything they do. I also get nervous watching small children run, expecting them to fall.

Before becoming a Father I never realised how important it was to have places to ‘secure’ your baby. Whether going for a quick slash or prepping her food, it’s physically impossible to carry your daughter everywhere you go.

With that, here’s a helpful list of items you can safely place your baby in and go about your day –

Ayla’s bouncer chair was ace! It had a multi-function of putting her in it while you could also bounce her to sleep. The bouncer chair was great for strapping her when you need a quick shower. Like everything she outgrew it and eventually taught herself to kneel, stand up and climb back into it. I miss that little chair.

Ayla’s jumperoo was another wise purchase. We put it in front of our floor length window in the living room, so she could rotate in it and watch the birds in the back garden. My wife and I would watch her in fits of giggles as she bobbed along to the beat of Elephant March on Jungle Book. Of course, she outgrew it to the point where her butt was nearly touching the floor and the tunes it played still haunts my dreams, but it was super useful while it lasted.

If you’re a fan of your toes and ankles, it may be best to avoid these. Ayla could clean you out like Roy Keane in his prime. Despite this, her baby walker had a removable play tray which entertained her no-end between breaking extremities.

The one place I can still put Ayla that she hasn’t outgrown. Of course, the feeding chair is only viable during meal times and it’s not really fair to stick her in it and not provide food.

So, in conclusion, I still get left holding the baby. I know Ayla is still finding her feet in the world and wants to investigate things/take risks and I have to loosen the reigns and let her fly – to a degree! I realise, however the times of Ayla getting carries and having snuggles with her Daddoo are limited and running out. From what I hear from more experienced parents, it won’t be long before I’m an uncool Dad ruining her street cred (possibly already happens, sigh!). So maybe it’s not the worst thing that I’m always left holding the baby.