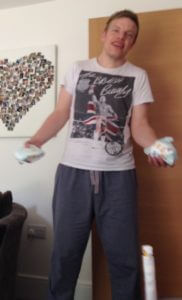 Here at How to Daddoo we pride ourselves on being a kind of unhelpful user guide on all phases of fatherhood. If we were in physical format we’d most likely end up in the paper bin or used to swat flies. In this post we’ll cover these nappy questions as only we can.

Thursdays used to be Daddy Daughter Days in the Daddoo household. I was finished nightshift for the week and it was Mummy’s last day of the working week so, after spending three days at her Grandma’s house, I got the pleasure of the day with our daughter. It was always a great day in which we’d have oodles of fun. One rainy November day, Ayla went to the trouble of having a mammoth three explosive poos. Yes, you read that right. THREE POOS! That’s three outfits in which she managed to stain every garment she had on. They were of runny consistency as well, no messing about.

I now know that boiling water isn’t what you soak stained baby grows in, apparently the water should be cold. Alas, I had several items soaking in steaming hot water in multiple Tupperware boxes when a perturbed Mummy got home to find what must have resembled a shitty science experiment. We ended up throwing the clothes out, now past the point of no return, along with the Tupperware and to this day we still have several lids with no bottom container knocking about our cupboards. Moral of the story, if your wife’s not in to sort the stains out properly, just chuck it!

2. When is the right time to empty the nappy bin?

We purchased a Tommy Tippee Sangenic Nappy Bin and initially, it was amazing. I’d even pitch it to my friends and show them how it worked when they came over to visit Ayla. Their minds most likely concentrated on my clear descent into sleep deprived madness rather than buying the product, they didn’t have any kids either but they humoured me with comments like “oh”, “yeah” and “interesting”. It resembles a static R2-D2. It was great in the early days when we could take it upstairs to save midnight trips to the wheelie bin. As I’m told, it encloses the smell and sanitarily disposes of the nappies .

Rachel and I had different ideas about when to empty the bin. She liked to do it everyday whereas I thought it was pointless doing so until it was full. There may have been a few times when I’d pretend to empty it. There were a few occasions when I had to intercept full nappies from her to avoid being rumbled. If any of you have used the nappy bin, you may think it’s simple to refill the cartridge. Myself on the other hand felt like I needed a full two day training session and to pledge allegiance to scouts honour to figure out how to tie a secure knot in the bloody bag. After the first few months of being overly cautious about everything, the nappy bin does become less of a novelty. Ours has become the resident dust gatherer in the corner of the kitchen or something to balance stuff on when there’s nowhere else to put it. I’ve gently broached the subject with my wife on a couple of occasions about hoying the thing out now it’s served it’s purpose, the R2-D2 looking jerk! Essentially, when it becomes almost too heavy to lift, it’s maybe time to empty it.

3. How many baby wipes are acceptable on one poo?

My lifelong lack of sense of smell leaves me the number one choice in our house for changing nappies. It’s a tough job but someone’s got to do it. The sense of smell thing can sometimes have other drawbacks like when Ayla has a ‘secret poo’ that goes unnoticed or when my own body odour becomes an ‘issue’. Lovely.  I regularly titter to myself looking at Ayla’s unmoved, unimpressed face which screams “CHANGE. MY. NAPPY!” from down on her nappy mat. Public nappy changes are by far more stressful and you often end up in cramped, unergonomic facilities sweating while wrestling with the baby to get her to lie still long enough to change.

After walking around several places I’ve realised there are only a handful of venues with unisex baby changing facilities, generally shopping centres. Sometimes I’ve resorted to lying the portable nappy map on the floor in disabled toilets after furiously wiping at it with 10 baby wipes just in case there are any dribbles. However, at home a nice leisurely nappy change breaks up the day and can lead to many laughs between parent and child. It’s always the same, when you need a quick nappy change it rarely pans out that way. In our early Daddy Daughter Days, I’m convinced Ayla timed it exactly one minute before leaving the house to have what I call an explosion. I like to rate Ayla’s nappies in three categories and this generally informs on how many baby wipes I need to use.

I have been known to use half a pack of baby wipes on one poo. My wife is a wipe wizard and can reduce this number considerably but we all know what it’s like when we go into ‘poo panic’ and no number of wipes is ever enough. Hey, when you’ve gotta go, you’ve gotta go!