As parents we’ve had a complicated relationship with the dummy or dodie as it’s dubbed in our house. Yeah, we’ve found the dummy a must to help soothe the baby back to sleep during the night. Despite the ‘good or bad’ debate, our main gripe is how they seem to be the Houdini of the inanimate object world, how and where they go I will never know. 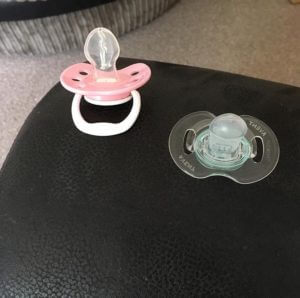 With our first born the dummy was a late edition, during the first 5 months of life, Ayla refused anything except the boob. This was a long and tiring time for my wife as Ayla used breadfeeding not just for food but for comfort, to fall asleep and was pretty much permanently attatched to Rachel. Once we began combination feeding Ayla and found the Mimijumi bottle she then began to accept a dummy at night and this give my wife some much needed sleep.

The only hiccup was that there was only one dummy Ayla saw fit, a Dr Browns. I know what you’re thinking, what’s the problem, the kid knows what she wants. The problem was as most parents will have experienced, no matter which dummy you use, it’s inevitable that it will go missing when you need it the most. At that time, you could only purchase this particular dummy in one or two shops, furthermore they only stocked them in the larger stores of these specific shops. Add into the mix the fact that it was about £8 per dummy and you’ll see where I’m going with this.

A trip into Newcastle to soley purchase half a tonne of these rare gems was common place and wreaked havoc on the old bank balance. We took to leaving backup dummies at our frequently visited destinations. Despite these measures we’d still receive the dreaded phonecall from Grandma beginning “Do you  know where Ayla’s dummy is?”

After Ayla’s third birthday we decided to phase out her dummy by the time she started nursery at Easter. This meant the magical dummy fairy (I’d never heard of that fairy before either) flew down, took the dummies and left a small gift. Lukily it worked a treat and we could finally say goodbye to the few remaining dodies.

Now onto child number two. Daniel has been a dummy fiend from his first few weeks of life. Also breastfed, we didn’t necessarily follow the advice given about avoiding a dummy initially.

For us it was all about self preservation and during the middle of the night, having cluster fed then vomitted for a good few hours, we opened the Avent dummy pack and whipped them in the steriliser. This is where the love affair for Daniel began. It worked for us and Rachel successfully breastfed up to six months alongside using a dummy.

Thankfully Daniel isn’t too precious about which dummy he uses as long as it’s available at all times. If anything we seem to go through dodies at an even more alarming rate than we did with Ayla. We were wise with our second born and invested in the magical invention that is a dummy clip.

Knowing that dodie is securely attached to the bib is a true wonder (until your child works out how to open it or better still uses brute force to rip it clean off and throw the lot!). This dealt with minimising daytime dummy disappearances however we are yet to tackle the night.

Imagine if you will, I’ve just got Daniel back to sleep, dummy firmly in, and I’m gingerly transferring him back into his cot. Then I hear it. I imagine the sound ranks as high on the anxiety level as an air raid siren. The dummy has dropped in the dark room. It doesn’t just drop either, I hear it bounce and shoot off in a random direction like rats scurrying into darkness on Duke Nukem 3D.

I end up crawling around the floor, a now restless Daniel still in one arm, and feeling around with my free hand like I’m in the Crystal Maze dome. I have a short time before the wailing begins and the sweat is beginning to gather on my brow. Sheer panic.

Where do they go? When they’re inevitabley dropped do they make some kind of quantum leap? To make things worse some of the dummies we got for Daniel are bloody transparent and even harder to find. They just merge in with the carpet.

In an attempt to combat this issue, my wife came home from one shopping trip utterly buzzing. You’d think she’d found a golden ticket the way she bounded through the door, announcing “Look what I’ve got!” It was a two pack of glow in the dark dummies.

I must admit for a second I was caught up in the excitement and may have ran over, retrieved said dummies from the bag-for-life and scurried into the shoe cupboard, enthusiastically shouting out “They work, they really work!” They did last a little longer than the standard dummies but I’m sad to say we’ve now lost them too.

I don’t know if anyone else has this problem but the main reason we’re usually late is due to the last minute search party we send out for dummies or a dummy clip before we leave. The kids are in the fully packed car and I’m frantically lifting the couch with one arm and wedging my head under trying to find a dummy clip, which appears to have entered the Bermuda Triangle.

Sure enough theres no clip in sight but there’s about 6 dummies under there. Worse than buses. I can’t wait for the day when we are a dummy free household. Until then our weekly budget will include £6 for dummies.

One thought on “The Case Of The Missing Dummy”