After watching my wife go through the whole wrangler that is labour, I swiftly decided to sign over all naming rights to her. Who was I to demand what to name the watermelon she’d just pushed through her nether regions. An experience which manages to be both brutal and magical in equal measure. 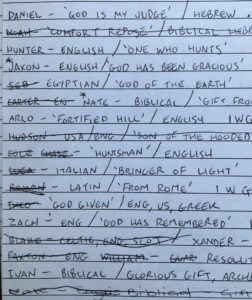 When naming Ayla we knew we loved the name. Rachel had always loved the names ‘Lucy’ and ‘Sophie’.  However one night when I was working the nightshift, Rachel had doodled the name and, after colouring the doodle in, our minds were made up.

Ayla in Turkish means “halo of light around the moon”. It’s also pronounced “eye-la” not “Ay-la” which is quite ironic considering my wife is a phonics specialist. Not only are we that awkward family who say always offer our surname “with an ‘A’”, we now use “Our daughter’s name is pronounced…”

With Daniel all the way through the pregnancy, we loved the names Hunter, Arlo and Daniel (after this writer). I personally liked the names Pax, Paxley, Paxon (essentially anything with a Pax in it) or much to Rachel’s amusement, Quon. All if which were vetoed at an early stage of the naming process.

We both decided Daniel wasn’t an ‘Arlo.’ In my euphoric state I boldly stated “He’s a Buster.” The midwife shot me a glance like I’d been on the gas and air and even more when Rachel who WAS off her face on the multiple pain relief options flowing through her veins. When everyone came to their senses the midwife was honest enough to tell us what a ridiculous idea ‘Buster’ was.

The name Daniel is a Hebrew baby name. In Hebrew the meaning of the name Daniel is: God is my Judge. It’s a good, strong name. Some of the best people are named Daniel. Wink, wink.

The namings are an enjoyable part of becoming a parent and shouldn’t be a bone of contention between couples. Secondly (and crucially) never take Urban Dictionary name definitions seriously.