If there’s one thing that parents need to get used to its that kids don’t work on the same time schedule as you. In fact, a lie in from now on will probably be around 6am! This means you need to know how to get up early, really early! Read on to find out how to make it that little bit easier. 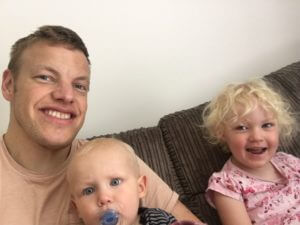 How to get up early the first time

Yes, I know that it’s particularly painful to get up and out of your nice warm bed the first time that you toddler prises your eyelids apart and shouts “DADDY!”

However, its actually often the best way to do things. In fact, it works in just the same way as not pressing that alluring snooze button and getting up right away. Yes, while you may feel a little groggy, getting up when you first wake means that you will probably perk up pretty quickly, instead of going back to sleep for an extra five minutes and then feeling like pap all day.

Next, it can be so useful to set yourself a goal to complete each morning, as this can be something that will motivate you to get up early in a willing fashion. It might be taking 10 minutes to do some exercise, catch up on your favourite website or dad blog (wink, wink), or even going in a short walk with the kids before you leave for work. Just make sure it’s important to you, and it will help push you in the right direction. To me, getting up early, the house is just warming as the boiler fires up, I’m eating cereal and watching cartoons. It takes me right back to my childhood.

Promise yourself a small treat

I always find its much easier to get out of bed when you know there is something nice waiting for you downstairs. To that end, I often treat myself to a nice, sugary cup of coffee that is not only enjoyable but is now an integral part of getting me to function properly in the morning as well.

Of course, there are other options you could try to including having a favourite food item for breakfast like pancakes or bacon precooked, or even a nice refreshing fruit drink. I actively look forward to my bowl of mixed kids cereal. Of course, you can make things much easier in the morning by getting a monthly water subscription for premixed beverages, rather than having to faff around and do it for yourself. Remember the key here is the less you have to do in the morning the less you will feel overwhelmed, and the easier it will be to drag yourself out of bed.

Take it in turns

Lastly, a genius way of making it much easier to get up in the morning with the little ones is if you and your SO take it in turns. Yes, that does mean you will have to do your duty sometimes, but it also means that in equal measure you will get to snuggle up in that delicious duvet and get an occasional lie in. Something that will help you to feel a little less hard done by when it comes to sleep, especially if you’ve had to get up during the night several times as well! I personally get up as much as possible for the brownie points and so I can watch what I want on the telly.

4 thoughts on “How to Get Up Early”