They say moving house is one of the most stressful things you can do. As with anything, add children to the mix and moving house becomes 10x more stressful. Here’s how we fared. 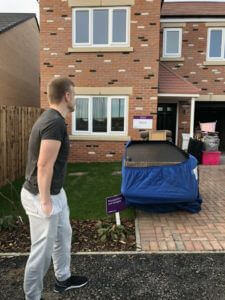 With many house moves our official moving day was pretty up in the air. We began to pack with a tentative date in mind and it was like we flicked a switch. Daniel’s D.M.O was to climb on boxes, rip open freshly taped ones and empty the contents everywhere.

Ayla on the other hand developed a sixth sense to what was packed on the bottom of the box and subsequently demanded it. They went hell for leather. Felt-tip pen on the carpet and peanut butter was smeared in the three piece suite with added saliva to make it stick.

Whilst trying to be all clever and tactical not packing the kettle, we soon realised we’d still packed the teabags and sugar.

My father-in-law and I had a great opportunity to get some packing done when Rachel and her Mum took the kids out for four hours to look for a new sofa. Under Rachel’s strict instructions the plan was to pack up the garage. Now, in our defence we did quite a bit in the house by taking down all the curtain poles and light fittings. They returned to find minimal things had been boxed in the garage after I had adamantly told Rachel’s Dad “Most of this is Rachel’s stuff. She’ll decide what to do with it”

The remainder of the four hours Rachel was out was filled with brews and we even managed to get the deck chairs out on the front lawn for a bit. A solid afternoon if you ask me. To be fair, Rachel spent the next hour getting most of the garage sorted and even managed to sell two items to passers by.

It must be said, if it wasn’t for my wife Rachel this move would never have happened. She started the ball rolling ironing out the details of the deal with the builders.

She sorted and did the vast majority of packing (in between a teacher’s workload) and all the while arranging logistics, phone calls, e-mails to solicitors, chasing up random certificates requested and making all the required changes that comes with moving house. If it had been left to me I’d be still sat on Football Manager surrounded by empty cups of tea and scrumpled up bags of crisps.

When we finally got moved in our home we thought we’d turned a corner and the stress would be over. Oh, how wrong we were. After spending a week living out of boxes due to needing wardrobes for our new place. (I went five days with no clue what box my underpants were packed in) Our next mission saw us bombing to IKEA in the rain and spending a total of four hours there with a one-year-old and three-year-old. All I can say is thank the lord for Grandparents.

Last Sunday I set about my usual routine of posting this very post. Low and behold, the site was having techincal issues and before I could look at it I found myself putting together the wardrobes with the help of family. With this being our first full weekend in our new house most of our family were over to see the new digs and help assemble furniture.

The little guy had been under the weather for a few weeks. After a phonecall to 111 we found ourselves awaiting the arrival of an ambulance. Daniel ended up in hospital with suspected pneumonia. After giving us a bit of a scare the little trooper has just completed his course of antibiotics and is feeling much better. We can’t thank the NHS enough. Our family were equally amazing and made a stressful, worrying time bearable.

Moving was also made easier with the help of the removals guys (they broke down and built up the furniture for us!)

Friends and family also selflessly gave up their free time to help us set up our new home. We couldn’t have done it without all of you. We had four amazing years in our previous house but so happy to be starting a new chapter in our forever home.

Here’s to our next adventure!