Halloween always evokes special memories for a whole range of reasons. I wouldn’t say we are that much of a ‘spooky family’ but it’s a time of year when we love to celebrate. Would you believe that both me and my wife grew up in houses beside graveyards – different graveyards by the way – we actually have to drive through the graveyard to get to my Mams house. Maybe we are spookier than I thought! 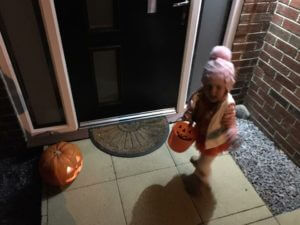 In my younger days, I always defaulted to being Frankenstein, possibly because I share a funny shaped head like the big guy. I was never the cool Mary Shelley Frankenstein but more the original 1931 Herman Munster looking one. I always loved the part of getting dressed up and painted just as much as the actual trick-or-treating.

In more recent times, I’ve gone to adult Halloween parties as Dexter Morgan (well, red hair spray, a green shirt, old work pass and the all important rubber gloves). Also a non-movie quality version of Tom Hardy’s Bane – more like his shit brother, Stain. As my older sisters birthday is the day after Halloween, most of the time the two celebrations have been merged into one, generally with a boozy fancy dress party in my Mams ‘big scary house’ in the corner of the graveyard. I recall one year when I’d just met Rachel and my family were abroad, we had a couple of friends over for pizza and scary movies. Unfortunately, upon arrival the pizza man refused to deliver into the grave yard and I ended up running down the long drive and along the street with no shoes in the rain trying to retrieve our scran. The guy seemed reluctant to hand it over, maybe he was spooked by the house or thought it was a prank, or maybe it was just the 6’1 man charging barefoot towards him out of a graveyard on Halloween night.

Once we became parents and Halloween rolled around we did the generic, cute pumpkin baby grow in Ayla’s first year and I know Rachel enjoyed taking Ayla to the Halloween themed baby classes. Last year, we took Ayla to choose her own Halloween costume at 18-months-old. She opted for another adorable, orange pumpkin outfit complete with tutu that was sure to bring in about a fortnights worth of candy (that she should share with her Daddoo).

Once Daniel came along it was going to be great coming up with outfits for the kids. My wife, Rachel is a massive organiser and dedicated completer finisher. She loves fancy dress and in the past she has always ensured the initial idea comes to fruition by getting the required parts together to formulate a costume, which as we know is not my strong suit.

Fast forward to 2017 and our obsession with Game of Thrones, I thought the perfect costume would have to be Ayla as Daenerys Targaryen and Daniel as a baby Drogon the dragon. Unfortunately Ayla had other ideas.

Following her obsession with The Cat in the Hat she was adamant that Thing 1 and Thing 2 were the only possible dress up options for her and her new baby brother. Ayla’s wish is our command and my wife made happen. Red rompers, iron on transfers and handmade blue fur wigs completed the look and definitely put a smile on our little girls face as well as many of the neighbours. Daniel was lets say not quite as enthusiastic! 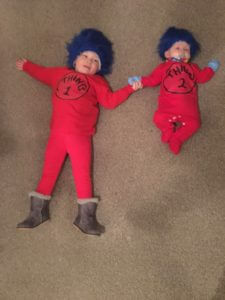 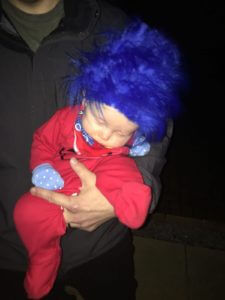 Now to the noble art of trick or treating. I must pass down what I’ve learned from years of pounding the pavements and hustling on the streets for treats.

We grew up with the classic rhyme: “The Sky is blue, the grass is green, have you got a penny for Halloween.” Note the quite blatant beg for monetary gifts in that one. Back in the day we’d carve a turnip, paint our faces, whip on a black bin liner and hit the streets but it was okay because everyone did it.

Nowadays, around our way, kids literally just say “trick or treat” and inspect the quality/quantity of the treats they receive. The younger children who wear the costumes, look the part and are genuinely grateful for the treats, you don’t mind handing over handfuls of candy. Some trick or treaters we’ve had are a tad too old for it and stand there, not even bothering to wear an outfit and are out for what they can get (come on at least wear a bin liner!)

Ayla’s first few Trick or Treating experiences have been so much fun. In our estate there are lots of young families and even some of the older residents seem to get into the spirit. From the odd carved pumpkin on the doorstep to the fully decorated (and actually pretty scary) houses, everyone who comes to the door is prepared and armed with sweet treats. It made us realise we have such lovely, friendly neighbours and a very polite little girl, albeit she tried to walk straight into a couple of houses whilst doing the round. Daniel seemed to enjoy it as much as a 3 month old baby can and decided to have a snooze half way round making him even cuter to everyone we encountered.

Again, thanks to my wife’s forethought in actually pre-buying the treats it saves me scratting around the back of the cupboards to find random objects to give to trick or treaters, I mean no-one wants a soft, half-eaten digestive in their bag of loot. Ayla took great pleasure in answering the door to other kids and dishing out the ‘candy’ as she calls it, calling ‘Trick or Treat” out to them as a greeting. There were a couple of times that our 2-year-old made sure there was no one hogging the sweets and kept the older kids in check by shouting “ONLY ONE”. As we ventured out to join the fun ourselves we left a bowl of treats on the doorstep with a little sign saying ‘Please take a treat.’ I told Rachel it wouldn’t last five minutes but we left it anyway. 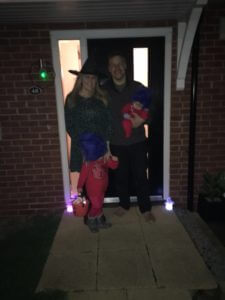 Once we went trick or treating Rachel escorted Ayla and Daniel along one side of the street while I took pictures and then we swapped. Now she either has a great eye for which houses are occupied and likely to be armed with sweets or people simply like her more than me. This year every house my wife and kids went to opened up and one even emptied his whole treat bowl into Ayla’s bucket for her costume efforts. It came to my turn and people must have thought “I’m not answering the door to that guy!” I didn’t get a single answer. Ayla started crying. Nightmare scenario. Top off the fact that it appeared someone had nicked our treat bowl upon our return home, I felt like the worst trick or treater in history. 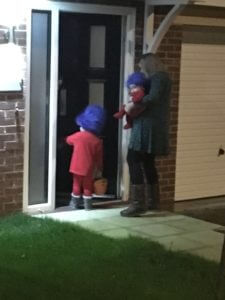 Turns out the treat bowl had just blown onto the garden and there were actually a couple of sweets left in there when I noticed it the following morning. I did consider pocketing the sweets and hiding the bowl from my wife after my apparently ‘uncalled for tirade’ against those thieving, little….you know the next part. Faith in humanity restored.

2 thoughts on “How to Halloween – How to Dad-BOO!”