As this is my first DIY post, I must start with somewhat of a disclaimer. I’ve never been very good at DIY, let alone decorating a nursery for my son. I’m clumsy, I tend to awkwardly get in the way and break things rather than improve them, sigh. I’m also not too proud to welcome any help and/or guidance from wiser members of the family or in other words let them do it for me. Alternatively I tend to provide a steady stream of cups of tea and biscuits throughout the day. In this instance my wonderful in-laws were the beneficiary’s of my tea making prowess. 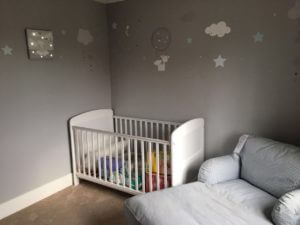 It began a few weeks prior when my wife uttered the words every husband dreads. “I’ve had an idea for baby boys room…” Any man whose done his time will know your missus ‘having an idea’ only means there will be work involved. The idea though, was a good one and as I also know, the lady is always right. So, albeit some three weeks later, I put myself to work.

We are in the fortunate position to have four bedrooms in our house. Until recently we had the master, our daughter’s bedroom, a spare room for any visitors and a ‘study.’ By study I mean ‘dumping’ room for anything requiring a space. I must also mention that we have an integral garage that has never housed a car, I mean who even puts their car in the garage these days!? Over the past two years our garage has evolved from a man cave complete with boxing bag and gym equipment to what can only be described as ‘dumping ground 2.0’. You name it, our garage has it all… laundry corner, island of misfit toys, storage shelves containing bulk bought essentials, gardening corner, rolls of spare carpet and cardboard boxes that no-ones ever going to use, I could go on.

Part of my wife’s ‘great idea’ was to, ever so simply, transfer the study to the garage, transfer the spare room to the study and free up a bedroom for the little fella. Yep, it couldn’t be simpler and she expected to be done yesterday. Who the hell did she think she’d married? Handy Andy?! 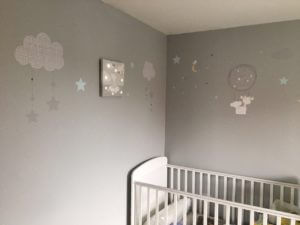 We began the initial reshuffle. As with most things, Rachel needed to oversee the project and explain to me EXACTLY how she would go about it. Eventually we started making some progress and I was able to escape for a bit. I took a car full of junk to the local tip/recycling centre. This was a big enough job in itself, mainly because I couldn’t find the damn place. I drove home looking forward to some much needed R&R, a nice sit down and a cup of tea. To my horror I was told in no uncertain terms to continue working upon my return.

Thankfully my in-law’s had arrived, Ayla was being entertained and we managed to transport the study stuff into the garage in some semblance of order. We were feeling good, we were on a roll, nothing could stop us, until… the dreaded relocation of the giant IKEA daybed. Before we began, my wife gave her overview of how we needed to proceed, talking angles, removal of drawers and slats, lots of waving arms around and positional language. We smiled and nodded, taking absolutely no notice. We were men, we could do this! Unfortunately, we underestimated the dimensions and it turned into a logistical nightmare. At one point I was wedged into the bedroom whilst my father-in-law teetered on the edge of the stairs with the majority of the frame hung over the banister. Rachel repeated her original plan and as much as it pains me to say, with the help of a screwdriver, it worked.

Finally the nursery-to-be was empty and we were ready to paint. After seeing a beautiful room advertised on the Mothercare website we’d decided on a light grey colour with wall stickers. If it was down to me I would have picked up the first tin of ‘grey’ paint I came across and cracked on. I had no idea there were so many shades, pardon the pun! According to Rachel, some grey’s have a ‘lilacy hue’ which just would not do. Are you getting a picture of how particular my lovely wife is? We gauged it with friends and they pointed us in the direction of the Light Rain shade and off we popped to our nearest DIY retailer and brought back two tubs off the silk stuff. They said at the counter silk was easier to wipe.

I’d like to say I painted the room like a pro, I didn’t. Rather, I taped the areas that didn’t need painting while my father-in-law got to it and Rachel decided she loved painting so off she went too. There was no room for little old me but providing coffee, tea and steak bakes was essential.

Once the room was dry the stickers went up and we could get the furniture in. Ayla was kindly passing down her nursery set to baby brother so there was nothing to build – score. Rachel had found a Stocksund Chaise Lounge in the bargain bin at IKEA – perfect for feeding and falling asleep on – it was all coming together nicely. Ayla certainly approved of the changes saying “Wow, so cool!” and finding the Chaise Lounge to be the perfect jumping platform. In what was a whirlwind weekend we all eventually sat down to admire the fruits of our labour and a nice cup of tea,made by yours truly of course. 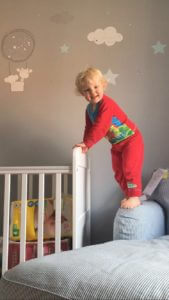 One thought on “Decorating Nursery”