When you first get your new baby home, you literally do everything within your power to protect them. There is a reason for the phrase ‘wrap them in cotton wool’. After the first few months of sterilising everything within reach, (bottles, teats, the house pet) you gradually become less scared and realise that babies bounce. That’s not to say you suddenly become any less nervous, actually for me it only got worse the more mobile she became. 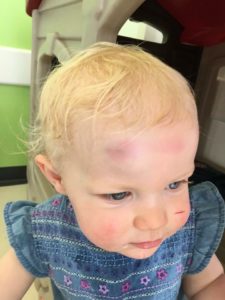 When Ayla was learning to stand then walk, I feel I lived on a higher level of anxiety. She sort of bypassed the crawling stage and went straight to walking at around 10-months-old which I was NOT prepared for. From that moment I picked up this habit of hovering around her, like an annoying bluebottle fly, and that hasn’t really rescinded even now. I don’t know if it’s just me or Daddoo’s in general but I find common ground with Ayla’s granddad in this and it makes me feel better that he feels the same dread.

In our house, my wife’s the one whose a little more laid back with Ayla taking risks. I guess that’s our balance. Working in early years, Rachel has seen and dealt with her fair share of self inflicted/accidental injuries to little people but apparently when it’s your own child it’s a whole different ball game. You have some kind of irrational worry come over you when you hear ‘that cry’ and you know they’ve really hurt themselves. Still my wife always encourages Ayla to try new things physically, test her boundaries and if she falls jump up. The tricky part is encouraging me to let her.

Most of the time when Ayla is testing her boundaries (jumping on sofas etc) across the room from me, I do this strange full body jolt to rush to catch her.

A) I don’t trust the person who is actually watching Ayla.

B) I have some sort of nervous tick.

C) I expect her to fall.

This is something that as parents we’ve talked about at length. In some ways we are both right in our arguments. I have to admit that Ayla tends to pick up on this and sometimes reacts differently depending on whose watching her. One great example of this is our regular visits to the local soft play. Rachel had been taking Ayla on her own, as I was at work, and was very excited to tell me how Ayla could navigate the toddler area on her own now with great confidence. Rachel would sit at the bottom of the slide and watch Ayla jumping, climbing and rolling around.

Cue my visit to the soft play with them. While Rachel chilled with a slush puppy, I found it necessary to follow a pace behind Ayla everywhere she went, rambling “careful”, “ooo, watch out!” and ” slow down”. I cupped her to lift her whilst climbing and made her wait at the top of the slide until I got on beside her, it’s steep you know. The other parents must have thought I looked big for an under 5. The only thing this achieved was a burnt elbow (mine not Ayla’s) and a 2-year-old who now seemed to have lost a little confidence. After that I needed a rest and Rachel went in. Ayla seemed apprehensive to go in alone and it took alot of coaxing, waving and thumbs up to reassure Ayla that she could in fact manage without a grown up. Seeing this I realised, I needed to loosen the reigns a little and that maybe my wife was right. Don’t tell her I said that!

Now it’s a constant battle in my head. When I see her running a little too fast towards the washing line pole my knee-jerk reaction is to dive across the grass like Jordan Pickford to intercept her. I still hear myself saying “careful” a little too often but it’s a work in progress. What I’ve learnt is, 9 times out of 10, if she does fall it’s never too serious, a bump, a graze or a little red mark. A big cuddle and a wet piece of kitchen roll seems to do the trick. Ayla’s favourite though is to sprinkle magic dust over her injury, thanks Granddad! Ayla now invents injuries in order to score some of that magic dust.

When kids are developing they need these moments that cause the minor injuries to build up their knowledge of ‘what happens when…’ We could tell them till we’re blue in the face that if you stand on top of a 3-foot slide and start to jump there’s a chance you will fall backwards onto the grass. However, by actually falling backwards onto the grass they learn their boundaries. Ayla finds it funny to throw herself on the floor and pretend to fall over. I’ve noticed she never does it on concrete, only on soft surfaces which leads me to believe she’s learnt that hard surfaces hurt. My wife tells me that all of these experiences will make our kids into calculated risk takers and help them make better decisions as they grow older to not knack themselves (that’s my input).

In her two years of life we’ve had one visit to A&E. As I’m not allowed to forget, Ayla was under my supervision when the incident occurred, typical.

Yes, she may have hurt herself whilst being closely watched by two adults on a ten-foot trampoline.
Yes, she spring boarded herself headfirst onto the metal frame.
Yes, I didn’t tell my wife about her fall for two hours hoping the egg developing on her head would subside.
But who got a well done off the doctor for knowing to give her calpol? – ME.

At the hospital, we were told “This won’t be your last visit here.” The doctor said this while a seemingly semi-concussed Ayla almost stumbled sideways into the hand wash sink after rocking furiously on the plastic horse in the waiting room, showing total disregard for her own safety. It didn’t make me feel any less guilty for her bruised, lumpy forehead. My wife was furious, not that Ayla had fallen, not that she’d been under my supervision, not that we’d ended up in A&E but that I hadn’t told her. All of the former happens to most little ones at some point. Top tip there guys, tell your Missus just in case.

I also began using the metaphor “How did cavemen babies survive?” during this time. I use this for an all-encompassing range of problems including dropped food on the floor or forgetting coats, prams and other essentials.. The ol’ neanderthal excuse taught me to be more relaxed and put those around us at ease as well.

I’m an extreme character. Sometimes, I need to loosen the reigns and let Ayla find her boundaries etc and sometimes I need to switch my brain on while watching her. Essentially, you learn to relax a little after a while and realise that babies bounce.

3 thoughts on “How to Accept That Babies Bounce”