My own Father’s immortal words “HIT THE POT!!” or “LIFT THE SEAT!!!” rang in my ears. It was with great pride that our Lord of the Rings style quest to potty train Ayla began at 15-months-old. 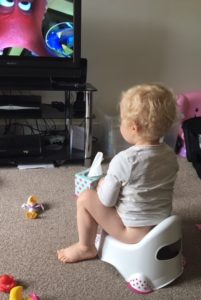 It started sort of by accident. There was a baby event on in Aldi and the potties, toilet training seats and toilet steps were all cheap as chips (Aldi, get in touch!). Not one to refuse a bargain we naturally stocked up and my mother-in-law also took advantage of the savings. We didn’t really put a lot of thought into it and the potty was placed in the corner of the living room. Ayla already had regular ‘no nappy time’ and one day she just sat on the potty and did a wee! The missus was really excited and did all that cheering and wooing and I joined in. My wife posted on Facebook asking if 15-months is too young to introduce the potty. She got a great range of responses from friends. We heard that girls can be quicker to use the potty than boys. That it’s never too early to introduce. Some friends’ children were completely toilet trained by 16 months.

What followed was a bit of an anti-climax. We started taking the potty to relatives houses and letting Ayla run about nappy free in the hopes that she’d just get it. It was really hit and miss. Sometimes we’d notice the signs and pop her on the potty for her to proudly tinkle. Other times she’d take herself behind furniture and leave a puddle without warning. On occasions, Ayla would get quite cross when directed to the potty, lurching away as though ‘the potty was lava’. She enjoyed using it for other means such as to stand in/on to assist in reaching things she shouldn’t have, to sit on whilst watching TV or enjoying a snack, to hide toys in/under and also as a fashion-forward hat. After a month or so the potty training thing seemed to fizzle out. With us both working full time and Ayla showing more disdain for the potty, we took the emphasis off toileting and rather just encouraged her to talk to us about having wees and poo’s in her nappy. 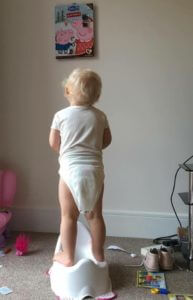 As the months rolled by Ayla began to tell us each time she’d weed and also developed a want for privacy when doing number two’s. She would begin by running around with a slightly panicked/manic look and shout ‘a poo, it’s a poo!’ Avoiding eye contact and shouting ‘NO, NOT LOOK AYLA’ with her palms raised, she’d then take herself out of sight. The odd grunt would follow and she’d emerge red faced and looking relived but would adamantly deny that she had a full nappy.

Having found out about our second pregnancy before Ayla turned two we began discussing our goals for her by the time baby brother arrived. These goals included sleeping in her big girl bed, playing football seriously in the back garden (stop picking it up!), successful potty training and, at a push, changing little brother’s nappies! When Rachel began her maternity leave we’d managed to tick two off the list and we prepared for the potty training plan. To be honest I am really looking forward to not having to pay for nappies for two kids when the little guy arrives. Only last week, the challenge commenced, Ayla now aged 2-years and 6-months.

My wife ordered two children’s books to help our girl along. The first of which was the Princess Polly Potty Book. It’s great to show encouragement to your little one and, although it does my head in, Ayla loves the button cheer function which she just NEEDS to press every 3-seconds when enjoying the story. The other was Ready to Go Toilet Time by Dr Janet Child PhD, a handy training kit which comes with a guide for parents as well as an illustrated storybook with reward charts with stickers. We took some time to read the parent manual and I’ve got to say I learnt a lot from it. It even motivated me to ‘hit the pot’ all over again and earn me some stickers.

Rachel blocked out a few days to minimise outings and began dressing Ayla in big girl knickers with no nappy during the day. Now 7 days in, to say that Ayla has taken to it well this time around is an understatement. There have been highs like when Ayla got out of the paddling pool, took down her cossie and weed on the potty – lets be honest I’d have just done it in there. There have been lows like when I noticed Ayla had weed all over the balls in the brand new ball pool at her friends 1st Birthday Bash. I must admit, I questioned Rachel’s methods, encouraging her to ‘just put a nappy on her man!’ There have been funny times (for me) like at my sisters house on her cream carpet, when my wife had to catch a steaming turd fresh from our daughters botty as I wasn’t quick enough bringing the potty. Hey, that rhymed!!

With all this in mind Ayla is making amazing progress and I couldn’t be more proud. She’s now opting to use the toilet over the potty and takes great joy in flushing and washing her hand – note to self, I need to practise this. It’s a testament to my wife and daughters perseverance in the teaching/learning process. Ayla’s butterfly poster is now adorning numerous brightly coloured star stickers and we’ve only had to wash her car-seat once so far.